Sports not your thing? Are you a better spectator than a player? Fear not. ProWall is not strictly for the athletically-inclined. Our friends over at South Paws Doggie Daycare in Massachusetts use their portable ProWall system as the perfect dog-containment system. 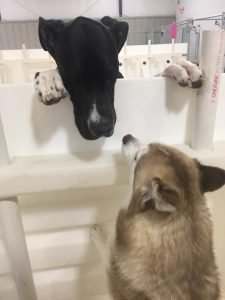 The pups are free to run around and play in their safe (and doggie durable) rink system. Because South Paws chose a portable ProWall, they are able to rearrange and move their rink as often as they need to fit their daycare needs. Built to last both indoors and out, ProWall also will stand up through years of sunshine and good times. Sure, they won’t win any hockey championships in there, but they certainly do prove that where there’s a way, there’s a ProWall. 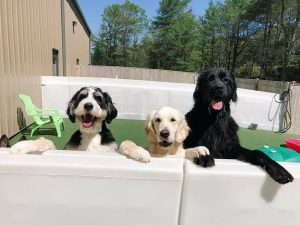 Check out a video of  Southpaw’s setup of both indoor and outdoor ProWall. For their outdoor use, they decided to incorporate their existing fencing with the ProWall to create more corrals with for their furry friends. Indoors, they chose to stick closer to the traditional rink system while still adapting the size and shape of the ProWall to fit their needs. We’re happy to work with whatever your vision is!