Why Buy A Gaga Pit From SRG? 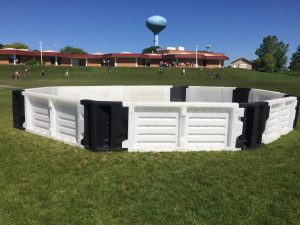 In our opinion, this testimonial sums up many of the advantages of a Sport Resource Group Gaga Pit – “Chris, so you know, I am not a PE teacher, but a teacher at a middle school who just wants to see kids having a structured fun time at school. We first saw gaga about 3 years ago at a YMCA camp. Our 7th graders who attended the camp really enjoyed playing the game, so we built 2 wood structures that summer back at our school. To no ones surprise the wooden structures were not durable. When we found your company we were quite happy. You staff has been great. The children were/are so happy to have gaga again. In fact, we bring the gaga pit inside over the winter months and the children can play even when it is cold. The pit is used even after the school day is done because kids return and play almost every day. Our parks and rec. dept. which helped pay part of the cost, also uses the pit during the summer months when the school is not in session as part of their summer programming. I have nothing but positive input for your gaga pit. It is easy to move and lightweight enough to take apart and reassemble. Thanks again, Karl K”