Do you like hockey? Try these variations of hockey!

Sure Ice Hockey is fun and could never get old, but it’s always fun to try something new! Here’s a list of all the different variations of Hockey people are playing today.

Broomball – Boots on Ice! Yes you fall… a lot, but broomball is tons of fun and is becoming very popular as more and more leagues and teams start popping up in MN and other states. Broomball is played with a ball, broom and boots on ice, and is loads of fun! Click the Link Broomball to learn more!

Bandy – Also played on ice, bandy is typically played on an ice arena closer to the size of a football field with two teams of eleven. Just like Ice hockey Bandy is played with sticks and skates but instead of using a rubber puck you play with a ball and sticks more similar to that of field hockey. Click this Link Bandy to read more. 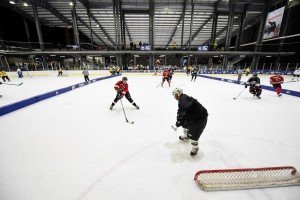 Pond Hockey –  If you ever lived in Minnesota you’ve seen that every year people long to sharpen their skates and watch the Ice harden as everyone gets out to play some hockey! Typically pond hockey is just played as a pick up game at any local public outdoor rink or ice arena, most people wear no pads and play with nothing but their skates a stick and some friends! Though it’s best to have hockey nets some people even makeshift their own by placing two objects a couple feet apart, a bucket or an object for the other team to hit with the puck to score! 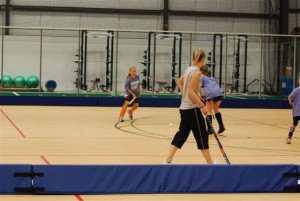 Floor Hockey – Floor hockey is played on a court such as a basketball court, or sport court dek flooring with tennis shoes and a floor hockey puck/ball. You can play with just about anything around the size of a regular ice hockey puck, it’s up to the users discretion. Here are the RULES

Street Hockey – Street Hockey is just like Floor Hockey but is played on asphalt or cement rather than court or ice material. Click this Video to learn the basics of street hockey!