It’s a Blast in Baltimore

Soccer fans, meet the newest addition to Baltimore’s sport arenas. The Blast recently received their ProWall system and have been wonderful about updating us on how things turned out. To be short: we think it looks amazing! 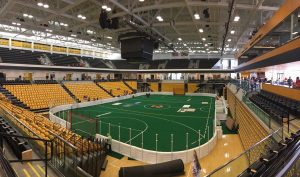 The Blast have quite the record of success. Not always finding home in Baltimore, the Blast originally were the Summits in Houston. After their move, they quickly proved themselves as Baltimore’s newest and most formidable sports team. The Blast made their new home proud as to back MISL champions in ’03 and ’04, it wasn’t long before the Blast worked their way back to the top in ’06,’08,’09,’12 and ’16.  Now with their awesome new ProWall system, the Blast surely may be on their way to another title in the upcoming season.

Learn more about the Blast:

Check out how the team set up their ProWall:

Less than a month, until the home opener, November 10th.
Here’s a time lapse of the 1st time the turf was rolled out at @SECUArena @TowsonU pic.twitter.com/2cmsv05AU2