Sport Resource Group was founded by Chris and Maria Guertin in 2006. Chris has spent almost 20 years in the sports and recreation field. Beginning with internships for CBS Sports and the Florida Marlins, Chris learned the value of presenting a professional product on a consistent basis and parlayed that experience into a stint as World Tournament Coordinator for the National Inline Hockey Association (NIHA). From its inception in 1993 until its successful merger with USA Hockey Inline in 1996, the NIHA built its membership database from nothing to over 60,000 players, coaches and referees.

In 1996 Chris joined the group at In-Line Sport Systems Inc (ISSI) to organize and run its successful Border Patrol Rink Systems division. After developing additional programs such as the Cross Ice Hockey program in the late 90’s with USA Hockey, Chris was ready for a new challenge. From 2004 through the beginning of 2007, Chris served as the Sales Manager for the Southeast and International regions for a local hockey company. Through those years he made many valuable friendships, forged valuable relationships with vendors and customers and developed the skills needed to consistently deliver the best possible products to recreation industry on a consistent basis. 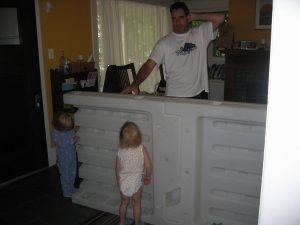 One of the first ProWall panels we made in 2007!

That experience combined with a passion for sports was the motivation behind Sport Resource Group. We invite you to review our website, give us a call or drop us an email to learn more about how we can help you accomplish your goals.

Chris and his wife, Maria, live in Minneapolis, MN, where they can often be found playing lacrosse, tennis, soccer and more with their twin daughters, Savannah and Sylvia, and son, Owen.