A Happy Year-End Thank You

As we wrap up another year here at SRG headquarters, we want to take the time to thank each of our customers for being so great to work with! We appreciate your kind words and awesome photos of your systems and all the fun and togetherness they can bring. 2017 has been a big year for us with multiple showings on the Today Show, Kare 11, and working with a number of charities like the United Hero’s League, Make-A-Wish, and the Strike it Wild foundation. 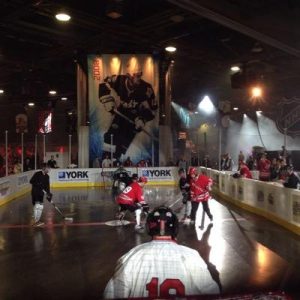 Chris’s favorite 2017 moment was setting up the NHL Declarations of Principles rink as a way to help kick off the 2017 NHL regular season.  We were asked to assemble a rink on the Today Show Plaza but it was pouring rain and the little kids who were waiting to play with the NHL players were disappointed.  All of the sudden, the sun came out, the rain stopped and the NHL players and kids had a magical 15 minutes.  The timing was perfect!

Maria is thankful for all the amazing pictures that schools and camps sent of their gaga pits and ProWall. Whitney loved playing gaga on the roof with the SRG family as well as seeing our ProWall on the Today Show! Kate’s favorite moment was SRG partnering with MASL and becoming the official system provider for the best indoor soccer teams. And, of course, Opie’s favorite 2017 moment were all the office belly rubs and sneaky treats.

We cannot thank you enough for making us love what we do! We look forward to the opportunities 2018 may bring. We hope you all have a warm and happy holiday season and a happy new year!