How Is Box Lacrosse Different from Field Lacrosse?

Many American college lacrosse coaches are looking to Canada for their players because Canadian lacrosse players generally play the sport inside. This has led to much discussion and consideration of the same developmental skills can be honed for players in the US. So what advantages are held by lacrosse players who practice indoors or “inside a box”? Let’s explore!

What are the differences between playing box lacrosse and field lacrosse?

Let’s break it down a little bit. Everything is smaller in box lacrosse: the playing area as a whole, the goals measure 4 x 4 feet instead of 6 x 6 feet, and there are no D-poles on the field. All of these elements mean you need to be tight and precise with your footwork and stick-handling. We’re going to take a look at what this means for the game, what it means for defensive players, offensive players, the goalie, and the team as a whole.

What are the player advantages of Box Lacrosse vs Field Lacrosse?

Playing indoor lacrosse in an enclosed area, or playing box lacrosse results in a player who is quicker with footwork, better with stick skills, and just generally more aware of what is going on in the game. According to many championship college coaches, every aspiring lacrosse player should be playing indoor box lacrosse. It simply results in a better, more proficient player.

Box lacrosse is FAST! Way faster than field lacrosse (which is also known as outdoor lacrosse). Some have even noted that it makes field lacrosse look like it’s being played in slow motion. This alone implies a better athlete comes out of indoor lacrosse. Read on and you will find that there are even more points that prove that box lacrosse produces a superior lacrosse player.

What makes box lacrosse so fast is not just the smaller playing field but also the confined area. There are way fewer out-of-bounds balls, so the ball stays in play. Box lacrosse is five on five, the 30 second shot clock applies, and the game is very back and forth, so the speed of the game means box players get more reps, and more chances to talk to the coach on the sidelines. This almost instantaneous feedback means players are more aware of what’s going on in the game.

A quicker and more physical lacrosse game also means a quicker mental game. Players have to keep in mind all of the elements that are going on in the game: time, score, shot clock, the position of the other players on the much smaller playing area, as well as being precise in where they aim. This forces the players to make split-second decisions, with little to no time to consider alternate plays.

Additionally, penalties are two minutes long, as opposed to field lacrosse’s 60-second penalty, which means an additional minute of playing short-manned, giving players an even greater opportunity to hone their defensive skills, no matter what position they normally play.

There are no long poles used when playing box lacrosse. This means that defensive players need to learn to use their bodies and footwork for defensive maneuvers. Not only this, but the ball moves from the defensive to the offensive position quicker, so players learn to transition at a faster pace.

Defensemen must always stay between the ball carrier and the net because the playing field is so small. This creates a smarter, faster, more skilled, and able defenseman. Partly because of this need to constantly stay between the offense and the net, box lacrosse players become better communicators. Off-ball communication is just as important as on-ball communication in lacrosse. Because of the fast pace and tight space, in box lacrosse there is no time to set up big defensive plays, and players must be able to communicate effectively with each other at all times, all the while being aware of what other players are doing. This ties into the spur-of-the-moment decision-making that comes with playing indoor lacrosse.

Because of the confined, smaller space, an offensive player needs to stay constantly in motion. As with defense, offensive players need to be great spur-of-the-moment communicators. Also, when there is a smaller playing field you will have defensemen draped all over your hands, and players will need to learn how to use their bodies to keep their sticks from being checked. Stick handling skills are also increased when playing box lacrosse. The reduced space and increased speed of the game mean that stick handling becomes both quicker and tighter.

Also, the smaller goal (4 x 4 ft net in box lacrosse) means that players need to be precise and accurate with their aim. Offensive players, in addition to becoming physically quicker with tighter stick handling skills, start to play a mentally quicker game. They are always considering the shot clock (which is 30 seconds), communicating with their teammates, the time, the score, and the position of the other players in the rink.

Higher-level box lacrosse has an average of 100 shots on goal per game, versus the 40 – 60 shots on goal in field lacrosse. The smaller, confined playing area means that players are constantly going to be around the net, taking shots. This results in a more talented box goalie with quicker, sharper reaction times. At Sport Resource Group, we’ve witnessed this effect first hand due to our visibility into organizations using our equipment. The results have been amazing to watch. 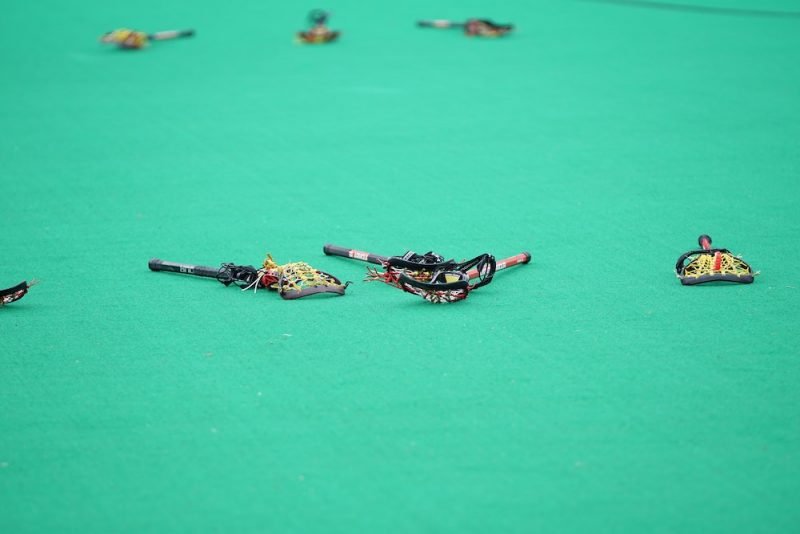 How the Team Benefits from Playing Box Lacrosse

The fact that players are in constant communication and contact with each other results in players who are going to be more intuitive and in tune with their team as a whole. Having quicker, smarter players is a definite benefit to any team.

“If I had my choice, I would have every player under the age of 12 play box lacrosse exclusively or at least a majority of the time. The number of touches of the ball and the ability to develop better stick skills in a game of box lacrosse far surpasses what happens on a field. Learning how to pass and catch in traffic, understanding how to shoot, and developing a sense of physicality are all positive traits developed by the box game.”